Philae is a rocky island in the middle of the course of the Nile at the south of Aswan. It was called in Hieroglyphic “Apo” which means Ivory. most probably it was an important scepter of trade especially  for the ivory.

Ancient Egyptian built a beautiful and magnificent temple on this island for goddess Isis , the temple had submerged in the water after building the first Aswan dam in 1906.

it was not until the seventies that the  Egyptologists together with the UNESCO selected a suitable place to save the temples of the island form the water, they had to wait till the completion of the high dam in 1971 which in turn stabilized the level of the water around the island .

There was an island called Egilica and it was reshaped to the same landscape of  Philae as closely as possible.

Then the a coffer dam was built around the temple where the water was shifted and the temple was then dismantled and  was transferred stone by stone  from the submerged island of Philae to Egilica island.

Finally the temple was reopened in its new location in 1980. 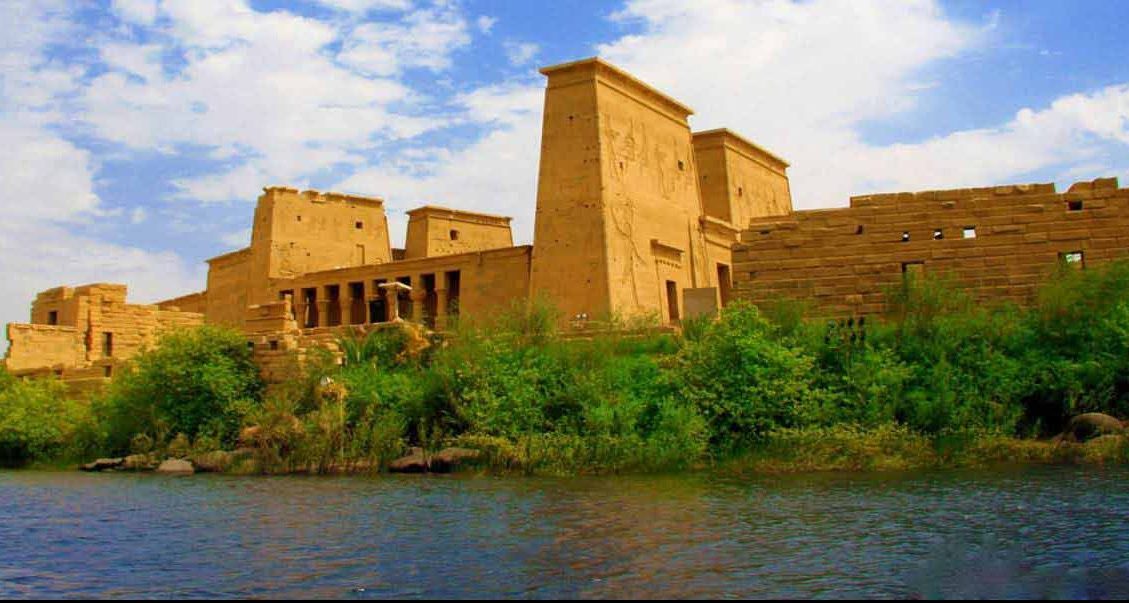 A great temple which occupies about the quarter of the island area. It is the main temple of the island with its huge an complete pylons and beautiful scenes.

The works of its construction began during the reign of Ptolemy II, then some others Ptolemaic kings contributed by adding some additions to the main temple like Ptolemy IV, Ptolemy V, PtolomeusVI, Ptolemy II and Ptolemy XI.

The temple is built of the same style of the temples of the New kingdom in addition to some other elements which appeared in the Greco-Roman period such as the Mammisi ( the House of the divine birth of Horus), and the Nilometer .

Mainly the temple of Isis consists of The 1st Pylon which is a great traditional pylon with two towers, and an open forecourt which leads to the 2nd pylon and on the left hand this court is the Mamisi or the house of the divine birth of Horus which has  scenes depicting of this birth of god Horus by his mother ISIS .

The 2nd Pylon leads to a Hypostyle Hall with 10 columns, then 3 vestibules leading to a sanctuary.

The most ancient remains of the temples of Philae date back to the reign of king Taharqa ( the 25th dynasty) who built a chapel for goddess Isis in the island. But the famous temple of Isis is the most important one.

In addition to the main temple of Isis there are other monuments such as :

The Kiosk of Trajan Chapel of Osiris, The Temple of Horus, The temple of Hathor, The Gate way of Tiberius, the Gateway of Diocletian ,and the temple of August.

The temples of the island were neglected and some of them destroyed after the official of the Roman Emperor to Christianity and during the reign of the Emperor Justinian (527-565 A.D) the main temple was converted to a basilica or church.