This great Temple of Amon Ra was known during the Middle Kingdom period as Ipt-Swt, which means the Selected Spot. It was also called Pr-Imn, which means the House of Amon. The name Al-Karnak in Arabic was derived from Karnak, which means fortified village, probably because the Arabs found many Temples and buildings in the area when they entered it for first time.

On your way towards the entrance you will find a ram-headed avenue of Sphinxes, which was built to protect the Temple. There are 20 rams on each side, extending from the small harbor to the 1st Pylon, which was built during the time of King Nektanebo I (30th Dynasty). As you cross this pylon, it takes you into an Open court, whose dimensions are100m long by 80m wide, built during the 22nd Dynasty, and containing rows of bud papyrus columns.

In the middle of the 1st Open court, there is a huge column, which is 21m high and has a bud papyrus capital. This part is known as the kiosk of Taharqa who ruled during the 25th Dynasty. This is the only column left from a colonnade that once had 10 columns. 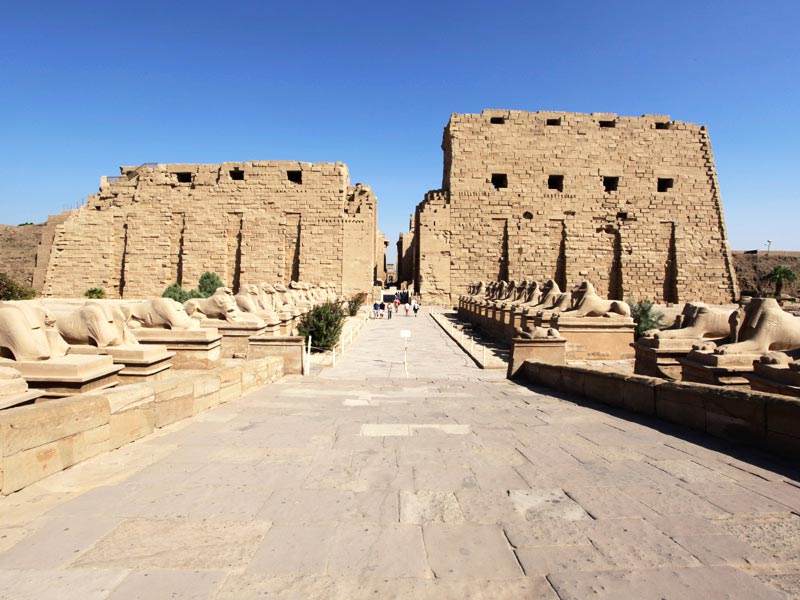 On the left side of this Court there are 3 chapels, which were built by King Seti II for the “Triad of Thebes”. On the right side is the Temple of Ramses III. This Temple consists of a small pylon, an open court and Hypostyle hall, leading to the sanctuary.

Horemheb built the 2nd Pylon during the 18th Dynasty, though it is now badly damaged. Ramses I, the founder of the 19th Dynasty, later completed it. Passing the 2nd Pylon, we enter the Great Hypostyle Hall, which measures 103m in length and 52m in width. It contains 134 papyrus columns; each column is about 22m in height and 3.5m in diameter. Amenhotep III built it and Ramses I, Seti I, and Ramses II decorated it, while King Seti I erected the other 122 columns in 14 rows.

The ceiling in the centre is higher than the laterals, and it allows light into this spot, which was the processional avenue of the Triad during the festival of the Opet. The scenes of the Hypostyle Hall represent King Seti I, in front of different deities, making offerings, while the southern wall is decorated with scenes of Ramses II, making offerings to the different deities or worshipping the Triad of Thebes. 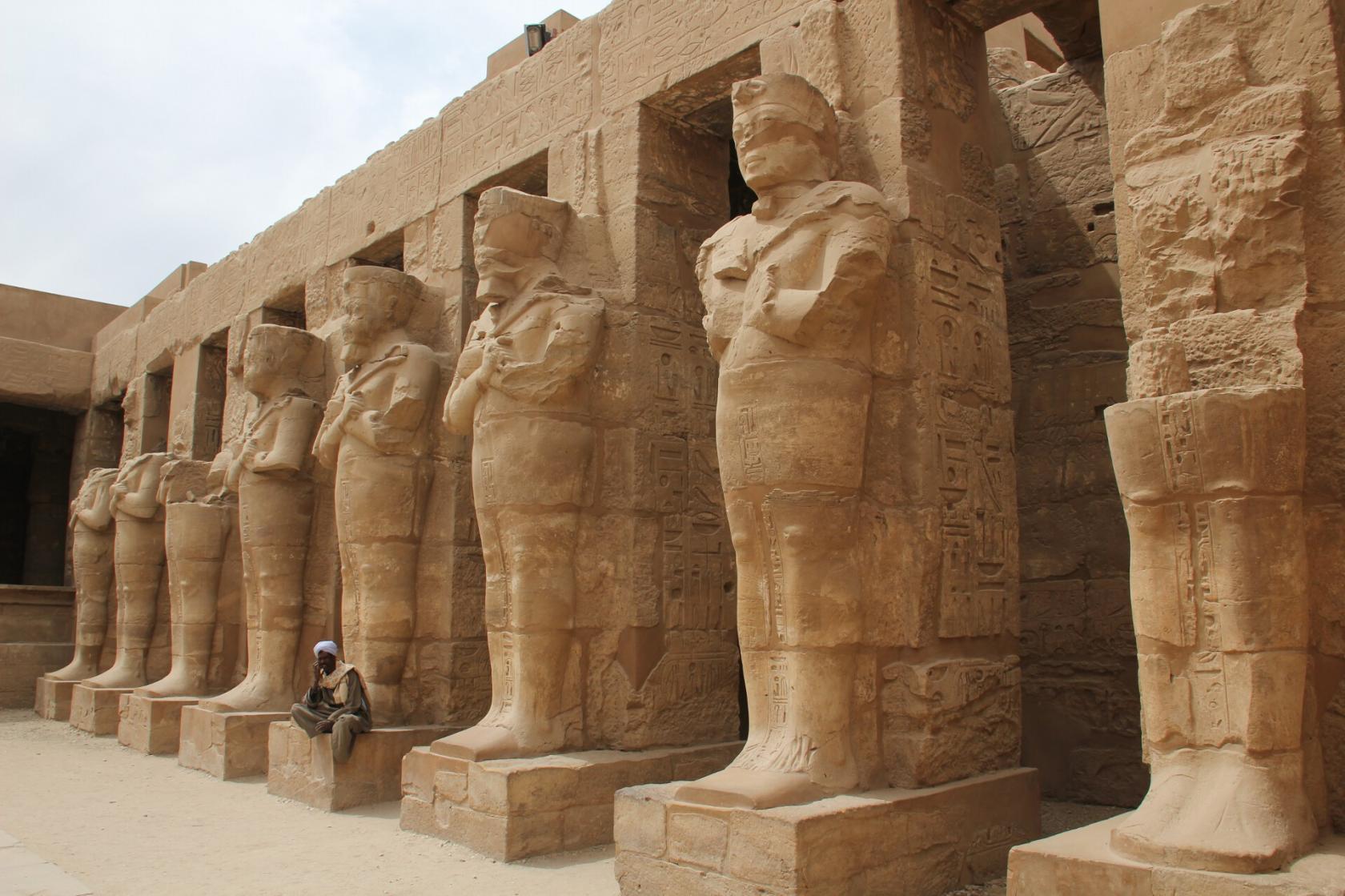 The Hypostyle Hall leads to The 3rd Pylon, which was built by Amenhotep III. It is remarkable that stones from previous periods were found incrusted in that Pylon, for example, the marble alabaster of Amenhotep I!

Crossing the 3rd Pylon, you come to an open, rectangular court, which is known as the Court of Tuthmosis I. In this court, Tuthmosis I erected 2 obelisks, as most probably this area was the main entrance of the Temple during his reign. Unfortunately, only one obelisk has survived: 19m high and around 310 tons in weight.

From the Court of Tuthmosis, we reach the 4th Pylon, which Tuthmosis I also built; beyond this is a rectangular colonnade, which he built as well. When Hatshepsut ascended to the throne she built 2 obelisks in that colonnade, the left one is still in its original position: 29.5m in height, 322 tons in weight and made of red granite!

After the death of Queen Hatshepsut, King Tuthmoses III built a high, long wall around these 2 obelisks to hide them.

The 5th Pylon, yet again built by Tuthmosis I, is damaged and on both sides of the entrance,Tuthmosis III built two small rooms.

At the end of the Middle Kingdom Courtyard, there is another Hall known as the Akh-Mnw, or the Festival Hall of Tuthmosis III. The hall in the north of the area is called The Botanical Room. This is because the walls were decorated with scenes of plants, animals and birds, which were brought from Syria, to Egypt, by the King.

Now we shall go back through the temple until we reach the Court of Tuthmosis 1 again (between the 4th and 3rd Pylons). 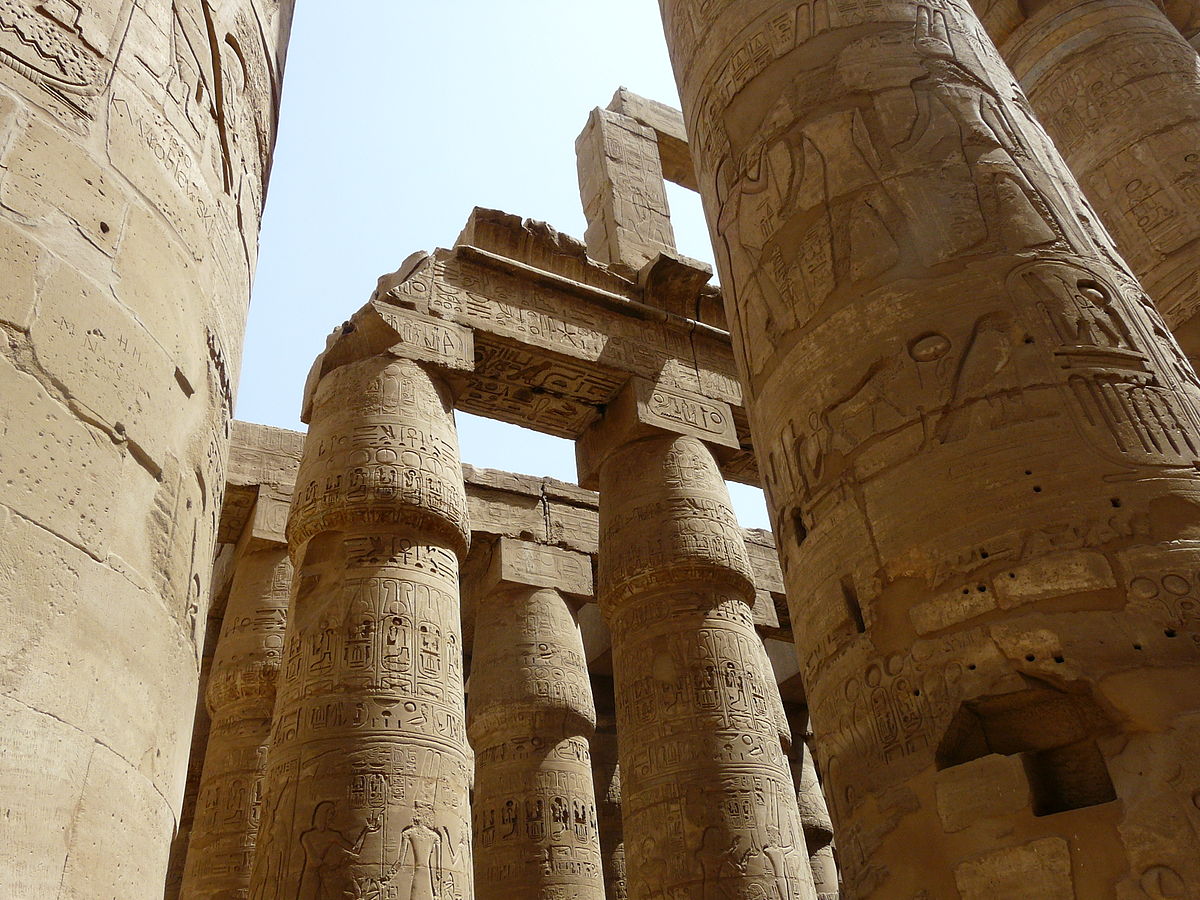 Turning left, we enter a courtyard, which is in front of the 7th Pylon. In 1902, the French Egyptologist Georges Legrain (1865–1917) discovered a very precious collection of statues hidden in the ground of this court, which is now known as the Court of the Cachet. The 7th Pylon, which is badly damaged, was built by Tuthmosis III.

Crossing the 7th Pylon to the court beyond, you will see 2 statues of Ramses II and Tuthmosis III.

The 8th Pylon was built by Hatshepsut, decorated by Tuthmosis III, and restored by Seti I. The scenes on the façade of the Pylon represent Hatshepsut with different deities, and a religious scene featuring Tuthmosis III.

On the left side of the Court, between the 9th and 10th Pylons, are the remains of the Heb-Sed Shrine, which was built by Amenhotep II and decorated by Seti I.

The 9th Pylon, which was built by Horemheb, is badly damaged. A large number of bricks were found inside, which were being used as filling. They belonged to the Aton Temple, which was built by Amenhotep VI (Akhenaten) in the 18th Dynasty and destroyed by later Kings who wanted to eliminate all traces of the “heretic” King.

Finally we reach the 10th Pylon, damaged as well, and again built by King Horemheb. In front of this Pylon there are the remains of an avenue of Sphinxes, built by Horemheb, and extending to the gate of Ptolemy II in front of Mut Temple.

Before leaving the Temple of Amon Ra at Karnak you should visit the Sacred Lake, which goes back to the time of Tuthmosis III. It measures 80m in length and 40m in width. Near the Sacred Lake there is a scarab, which is considered the biggest scarab left from Ancient Egypt, dating from the reign of Amenhotep III. The Ancient Egyptians called the scarab, Khebry, and it was the symbol of the Sun God. The word itself means to create; it was thought to bring to the sun in the early morning.