Isolated by hundreds of kilometers of desert, Siwa Oasis remained virtually independent from Egypt until the late nineteenth century, sustaining a unique culture. Yet despite – or because of – its isolation, outsiders have been drawn here since antiquity. The legendary Army of Cambyses was heading this way when it disappeared into a sandstorm; Alexander the Great journeyed here to consult the famous Oracle of Amun; and Arabic tales of Santariyah (as the oasis was known) were common currency into the nineteenth century. In modern times, Siwa has received visits from kings and presidents, anthropologists and generals. Tourism only really began in the mid-1980s but has gathered steam since then.
The oasis offers all you could ask for in the way of desert beauty spots: thick palm groves clustered around freshwater springs and salt lakes; rugged massifs and enormous dunes. Equally impressive are the ruins of Shali and Aghurmi, labyrinthine mud-built towns that once protected the Siwans from desert raiders. Scattered around the oasis are ruined temples that attest to Siwa’s fame and prosperity during Greco-Roman times.
Visitors are also fascinated by Siwan culture and how it is reacting to outside influences like TV, schooling and tourism. Nowadays, it is mostly only older women who wear the traditional costume, silver jewellery and complex hair-braids; younger wives and unmarried women dress much the same as their counterparts in the Nile Valley. But the Siwans still observe their own festivals and wedding customs; and among themselves they speak Siwi, a Berber tongue.
Though things are changing, the Siwans remain sure of their identity and are determined to maintain it. Siwans remain deeply conservative in matters of dress and behavior. The tourist office asks visitors to refrain from public displays of affection, and women to keep their arms and legs covered – especially when bathing in pools. Women should also avoid wandering alone in places with few people around, especially palm groves (which is seen here as an invitation to sex). Local people are generally more reserved than Egyptians, and invitations home less common.
The best time to come is during spring or autumn, when the Siwans hold festivals and the days are pleasantly warm. In winter, windless days can be nice, but nights – and gales – are chilling. From May onwards, rising temperatures keep people indoors between 11am and 7pm, and the nights are sultry and mosquito-ridden. Even when the climate is mild you’ll probably feel like taking a midday siesta or a swim.

Despite – or because of – its isolation, outsiders have been drawn here since antiquity

Beyond the fact that it sustained hunter-gatherers in Paleolithic times, little is known about Siwa Oasis before the XXVI Dynasty (664–525 BC), when the reputation of its Oracle spread throughout the Mediterranean world. Siwa’s population seems to have been at risk from predatory desert tribes, so their first settlement was a fortified acropolis, about which Classical accounts reveal little beyond its name, Aghurmi, and its position as a major caravan stop between Cyrenaica and Sudan. The Siwans are related to the Berbers of Algeria, Tunisia and Morocco, and their language is a variant of the Berber tongues, so their society may have originally been matriarchal. 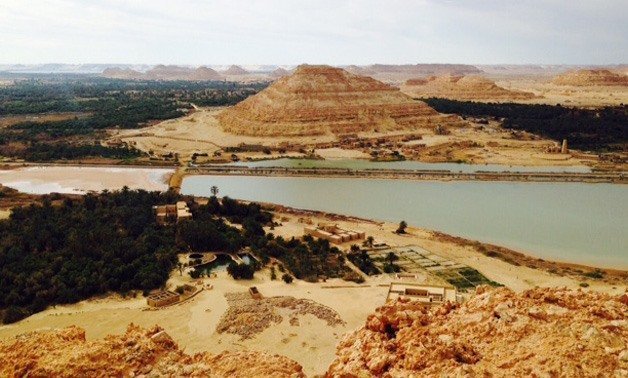 According to the Siwan Manuscript (a century-old compilation of oral histories whose sole copy is seldom shown to outsiders), repeated Bedouin and Berber raids had reduced Aghurmi’s population to a mere two hundred by the twelfth century AD. Around 1203, seven families left Aghurmi to found a new settlement called Shali, whose menfolk are still honoured as the “forty ancestors”. Later, newcomers from Libya settled in the oasis, giving rise to the enduring distinction between the “Westerners” and the original “Easterners”, whose historic feud began after they disagreed over the route of a causeway that both had undertaken to build across the salt lake of Birket Siwa. Nonetheless, both coexisted within a single town built of kharsif: a salt-impregnated mud which dries cement-hard, but melts during downpours – fortunately, it rains heavily here only every fifty years or so. Fearful of raiders, Shali’s elders forbade families to live outside the walls, so as the population increased Shali could only expand upwards, with passageways regulated to the width of a donkey.

Another feature of Shali was the tradition of violent feuds between the Westerners and Easterners, in which all able-bodied males were expected to participate. Originally ritualized, with parallel lines of combatants exchanging blows between sunrise and sunset while their womenfolk threw stones at cowards and shouted encouragement, feuds became far deadlier with the advent of firearms. Despite this, the Siwans immediately closed ranks against outsiders – Bedouin raiders, khedival taxmen or European explorers. The Siwan Manuscript relates how they considered poisoning the springs with mummies in order to thwart the Muslim conquest.

Paradoxical as it sounds, Siwa’s biggest problem is an excess of water, Smelly, mosquito-infested ponds attest that the water table lies only just below the surface, and the water supply is saline or sandy, so residents have to collect water from springs by donkey. Engineers are installing a water-purification plant at Dakhrour, but it will be some years before it’s finished.
The road to Mersa Matrouh (completed in 1984) has spurred exports of dates and olives, along with tourism to the oasis, Some five hundred Siwan women are now stitching traditional embroidery for an Italian company, earning twice the local wage for an agricultural labourer: the unmarried ones have saved so much money that they can be choosy about taking a husband.
Meanwhile, the Siwans’ desire for breeze-block houses with proper bathrooms rather than the traditional dusty mud-brick dwellings has alarmed conservationists. Britain’s Prince Charles is among the VIPs backing the Friends of Siwa Association, a conservation body set up by Mounir Nematalla. Many locals regard the Friends of Siwa as a scam to embezzle donations, and resent Nematalla for expropriating part of Shali for his own profit.
In 2002, Italian NGOs helped establish the Siwa Protected Area to safeguard some 7,800 square kilometers within and beyond the oasis. The three protected zones harbor mammals (two species of gazelles and four kinds of desert fox), birds (26 species breeding locally, plus seventy migratory) and prehistoric fossils